Together with their team of up to 25 people, they have developed the software over the course of 10 years. During this time, the TVB team has received around 17 million € in generous funding, largely carried by the James S. McDonnell Foundation.

Visit the TVB website to download the free brain simulator for your PC, Mac or Linux computer, learn about the scientific groundwork and find documentation, help and support for your own applications! 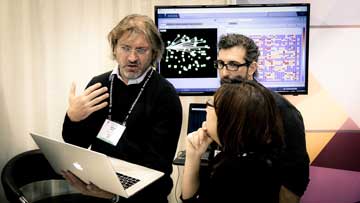 Attend the regular TVB:NODE user conferences to meet other TVB users and learn about practical research. 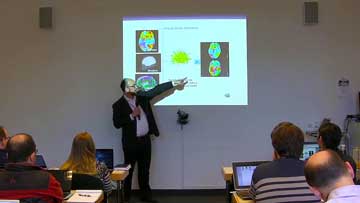 View educational video courses about using TVB to build your own brain simulator.

The TVB software has been downloaded more than 18,000 times and the scientific groundwork has been cited in over 100 peer-reviewed publications. The Brain Simulation Section, large research facilities at AMU in Marseille and at Baycrest in Toronto have constructed and simulated hundreds of individual, Connectome-based brain network models and published their findings. Well over 10 million CPU core hours went into TVB simulations, running on average MacBooks, faculty Linux servers and supercomputers like JURECA in Jülich.

Instead of simulating neurons and small brain regions at the cellular level on massively parallel hardware, TVB accelerates this process and reduces complexity on the micro level to attain the macro organization: A TVB model of a patient's brain generates sufficiently accurate EEG, MEG, BOLD and SEEG signals despite the complexity of a micrometer of neuronal tissue, which is reduced by a factor of a million through methods known from statistics. The key is to keep the geometry of the brain's shape and its folds precise on a millimeter level.

This smart reduction of complexity has earned TVB worldwide recognition as demonstrated by invitations to participate at neuroinformatics events such as INCF conferences, and workshops dedicated to High Performance Computing (HPC) (such as organized by NSG). TVB is used as a reference tool for use of HPC resources in the neuroscience community and directly links to other large-scale neuroinformatics efforts such as the Allen Institute’s Mouse atlas or the Human Brain Project (HBP).